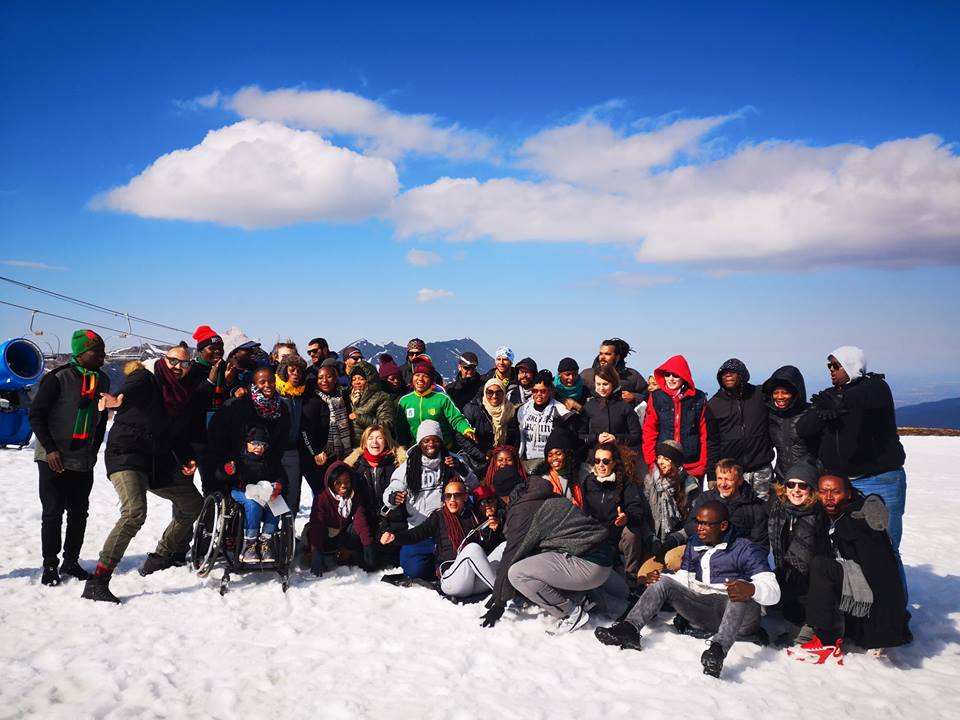 Considering we barely knew each other almost 8 months ago, those words are not only true but had a prophetic ring. Barefoot Theatre from Zambia, Samba Résille from Toulouse and the South African delegation faced an arduous task. What can we learn from each other, using the arts, so our youth can face their future with greater optimism? In my thinking, the Zambians are the heart of the exchange. Perhaps it is their purest of pure intentions – to reintegrate street kids back into society using the arts – that compels one  to do something with whatever you have. If the Zambians were the heart of the exchange, South Africa was its mind, sharing how all forms of art are used to  bridge the many divides in our country. I heard the term cultural activists being used with great frequency in SA, but was this true for the French?

Allow me to share an experience. It was a Wednesday evening and I was attending a pagode, where various musicians and singers converge and share Brazilian music. I sat lurking in the corner (as I always do) and enjoyed the harmonious voices  floating over me. This, I thought, must have been what sparked  Samba Résille’s inception. The simple desire to inhabit a safe space where people could enjoy music, food and friendship. As they sang, I was transported so very, very far away…

The notion of transporting people through music  was perfectly embodied by energetic and enigmatic Greg  Ecureuil, who can seldom be seen without a whistle around his neck. He has the uncanny ability, while swerving between the children, to inspire and discipline at the same time. Greg is band leader of Pourquoi Pas Nous, a group of talented children all differently abled, who were once relegated to not only living but performing outside mainstream society. First a confession. I found it incredibly difficult to keep time, dance, smile (or bring out my voodoo vibes as Johan joked) while playing drums.  Yet, these children, when a drum was placed in their hands, could master not only the drums but splashed their voodoo vibes so far and wide it infected everyone. “I treat them like musicians first…’’ said Greg with great pride. And he should be proud as Samba Résille have taken these talented musicians  and introduced them to France itself! Michael Mwale from Zambia, while attending a workshop, opined, “This project creates a certain amount of hope for us. Disability is not a priority in our country. Yet what we saw, the small actions that have huge impacts is what we will take back to our country…”

The name, Pourquoi Pas Nous, means ‘why not us’, is not only a testament to Greg’s belief that music transcends everything but lies at the heart of Samba Résille. I observed that very same ethos at The Blind Youth Institute, where Samba Résille  offers classes to the young. This partnership that is a decade old to date.  Not only did we discover more about the institute itself but through various workshops uncovered what the blind or partially sighted face in a sensory deprivation room and while rock climbing blindfolded. Again, I must confess that when BatucaBraille performed a hard lump formed in my throat. Especially when they integrated  both Zambian and South African songs while playing. This, I thought, is not just a mobility….

It is so easy to be caught up in the paperwork, the policies and boring 9 to 5-ness  a cultural exchange of such magnitude and noble aims demands.  Yes, the policies within each organisation and their respective governments do matter. As well as the various challenges – social, political and financial each country faces. Yet, Christelle Dryer summed it up perfectly when she said, “There are so many similarities between the countries and that’s what really connects us and allows us to share so freely….” This was very visible while visiting one of the educative structures,  Centre de Loisirs Associé à l’école,  in Toulouse where children from various backgrounds converged. In this space passionate educator reiterated the idea that while qualifications are essential, nurturing human values are of greater importance. The Zambian and South Africans shared their artistic gifts with the children and it was thoroughly enjoyed  by all.  Hamza, Olivier and David while speaking on a French radio station, France Blue Occitanie, shared the aims of the cultural exchange.  ‘We are focused on young people. But it is important they feel and experience. It is a process of self-discovery we want to share with them…” remarked Hamza.

With our faces painted in blue, yellow, black and red we took to the streets. This time it was not the hills that were alive with the sounds of music but the streets of Toulouse.  Again, the real impact of the cultural exchange was felt while participating in the Carnival in Toulouse. Samba Résille did not merely move crowds with their energetic drums, causing one’s body to gyrate  in an almost primal way, but used their voices as well. The crowds were more than entertained by two very vibrant South Africans (I shall not mention names…uhm…Martha and Shamiella) who Beyoncé-moved their bodies to the drums. Zambian and South Africans alike all hopped onto the truck and fused their voices to the rhythmic sounds provided by Samba Résille. We were all….on fire!

Being in Toulouse made it very clear that we are all indeed cultural activists, imagineers and explorers of the óther’. Seeing this in action when Samba Résille’s  youth band performed was electrifying. Already these young musicians have a clear idea of how to perform in order to set them apart not only from their “parents” but from other Samba bands. The youth band consisted of some of the differently abled musicians. Not that one noticed. They were all musicians par excellence first!

Yet one of the most memorable events  was our day on the snowy mountains. It was John from Barefeet Theatre who initiated the snow ball fight and goaded everyone into doing the same! David and Martha pretended to be snow angels while Phodiso erected a small snowman. Mpumi diced on the snow like the maverick she is. Faless  managed to take incredibly stylish pictures while dangling near the edges of that steep mountain!  Then the inevitable happened….we sang and danced. The French, the Zambians and South Africans sang and danced. We rejoiced on that cold mountain because we were grateful, joyful and stood side by side with our comrades. If the Zambians were the heart, the South Africans the mind, then the French are the glue that binds us, the soul of the exchange.

In that moment the phrase that came to mind was not why not us. Instead it was “Nous étions destinés à être ensemble” . It was destined to be us. Each and every one of us from Zambia, Toulouse and South Africa. Artists, academics, photographers, videographers, teachers, dancers, writers, chefs, musicians, actors, accountants. All of us who opened not only our hearts and minds but our very beings to a profound exchange.  It was always meant to be us. Us forging a path that did not exist for those who will follow. Us. Creating safe spaces for not only the youth but anyone who needs it. It was always destined to be… us.