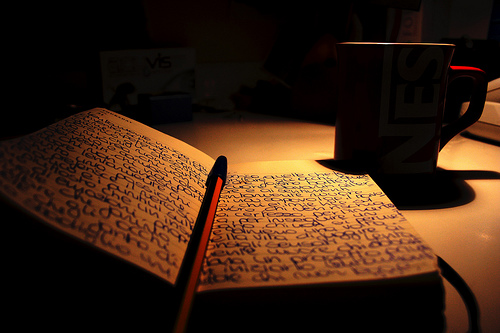 Small little nothings jotted in my notebooks. I am always writing and sometimes the words or phrases written down find their way into my music.

I know the shape of my lover’s ears, the curl of his lips,  the feel of his skin and his many faces. First he came to me as a poet, offering words as small gifts…

‘I want to take the sky between my fingers and hand you the stars one by one each night,’ he said…

Yet in between his words the drums of war sounded. I knew his eyes would disappear, the soft cadence of his voice alter and his hands harden in between mine. Slowly,  deeper and deeper into his lost boy’s skin my poet retreated. Until out of the shadows The Soldier emerged. He wore defeat, blood stained earth and forgotten freedom instead. He railed at the gods, at men whose bones were lined with silver, and cried for his brothers lost to the depths..
I know the many faces of my Lover
*                                                                             *
Caught between the the strands of our hair words flutter like
Autumn leaves
Against rocks and boulders
Our fingers strain,knuckle white for
The strangest of fruits as
Words the color of ash
Search for dry land

We were told that it flies at night. Gathering lost stories between its feathers. Far above our head it flies, searching for a window to peak into, a wall to land on. ‘It knows child. It knows some dreams need to be picked off the eyes its dreamer. Dreams stuck at the top of children’s heads, or in between the folds of adult’s fingers. These dreams turn black, poisoning sleep and crippling hands. It knows what dreams to keep safe and it’s those he gathers to himself and flies away with. Far and further away it flies to a place beyond the lands of frozen light. Further away it goes into wide open spaces until it finds the place where the stars are black and the sky a dazzling white. This is the land where the Impossible Everything walks, breathing color into all the seedling dreams underneath its feet…

We live with the memory of the warriors we once were…

You need no translating. You’re like the stars, the wind, the sound of my Silence where Dreaming begins