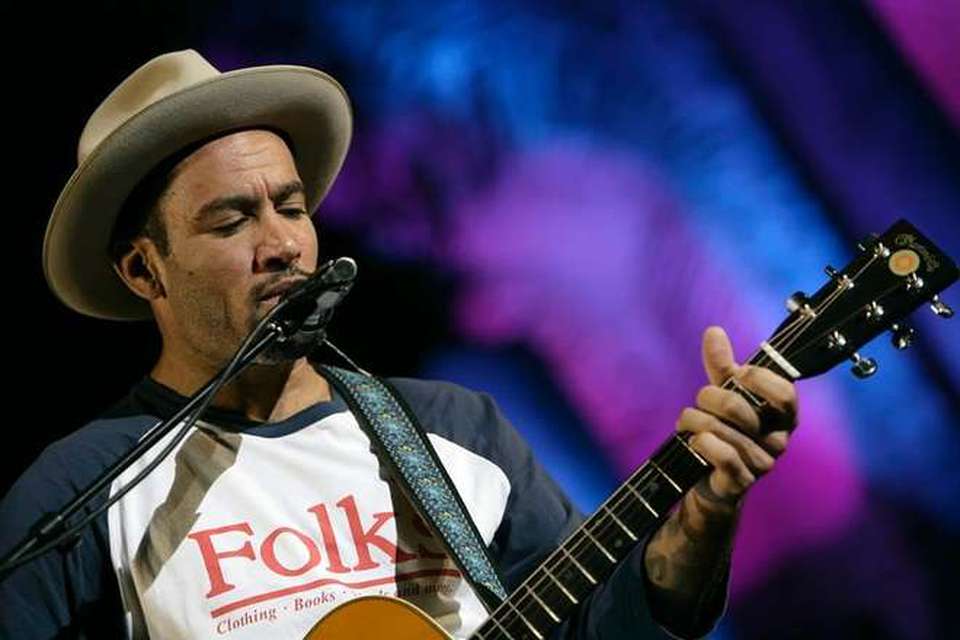 Ben Harper’s coming to South Africa. It is no secret I have been driving everyone nuts for years on social media and everywhere else, performances included when I speak of him. So here’s the back story.  I saw him in 2010 in Montreux for the first time.  I recall watching him sing while I stood right at the back of the hall. I was alone and crying. I realised for the first time I was in trouble and had no one.  I know the feeling of absolute aloneness is one many can relate to. My marriage was ending and it felt down right apocalyptic. I was in love with one man since the age of 16 and now did not know what to do or where to turn.

Now any musician will confess that composing sad music is easy. Well, it is easy for me, as there is more than enough sadness to go around. The album I was in the midst of composing was named Call it Love and followed the arc of a relationship from its inception to it disastrous end. I composed all the tunes that dealt with rage and the shattering of a life, my life. Yet I found it impossible to look back into my past and share music that spoke of the joy I once felt. So I turned to Ben instead and in under an hour wrote a crack happy song called With You – where I imagined I knew this man! When I perform I call it my Stalker Song in jest. It is honestly easier to be silly than share all the loss and pain I put aside in order to write that song. And let’s be honest, no one wants to hear that story at a wedding! Take a listen…

The full name of the album is Call it Love Anima Sola. Anima Sola means the forsaken soul. And I felt so forsaken, so lost I contemplated suicide.  But before the intervention by friends, it was Ben Harper’s voice I listened to as I sat at the beach at 3am. Of course the inevitable happened. I come from a family of dreamers and was gifted with a dream so vivid, so real I was convinced the life I was living was a dream. In short I was having an Inception moment and good ole Ben was slap bang in the middle of it. I awoke from that dream knowing a few things. Ben Harper would come to South Africa…but the realisation that hit home was this –  there was more life and music to be had. The dream was what I needed as I could not see any meaning to my life at that point.

I have written four albums since then. Endured more disappointments and losses (people die, I left them or they left me – life in other words) yet I will never forget that moment when I lost all the faith I had not only in myself but the world….and the voice that pulled me back from the brink.  So I wrote  and sang my way through every experience. I learnt how to reach out to friends, how to give what I think I lack, to drink bad wine and smile, great whiskey and laugh, sit at a lagoon and read and bake when upset.

I also became the ambassador to The Living Cornerstone Alzheimer’s Homes where I gained not only a spiritual mentor but a white granny also. Gilda Schammell, one of the founding members of The Living Cornerstone (TLC) above all shows me what faith in action looks like. Saying I am the official ambassador is kind. I am a glorified personal assistant who sits on her carpet, takes notes, writes articles for the papers, makes spice tea, runs errands and spread awareness about Alzheimer’s and the work TLC does when I perform. However, the perks are amazing. Gilda’s omlettes are the best I have tasted. And then when I least expected it…. I fell in love with a Mexican I met  during an international cultural exchange in Zambia.

When word reached me that Ben Harper was coming to SA, I lost my mind of course. There was screaming, yelling and incoherent babbling (mostly to the Mexican). Yet I could not help but marvel at the journey music has taken me on. Sure, I met people and performed at cool spots and yeah, drank a lot of whiskey. Am I as rich as I would like? Nah, but I am lucky and it pains my heathen soul to say this but I feel..blessed indeed. I am asking my friends to vote so I can open for the man….but to be honest…I am just grateful to be able to see him live and know that I am no longer the same person I once was. No longer as lost, as unsure about myself (except when driving as I am directionless and  in a shopping centre where get distracted by….crockery and baking goods). And yeah,my father is dying and someone I love is afflicted with Alzheimer’s – yet  I know I will never find myself in that car staring at the pills I bought the day before. I no longer doubt the love I have for music and every single person in my life. Iam no longer searching for meaning as I know now, what I did not many years ago – my life by itself has meaning. Also, The Mexican is a musician and understands perfectly my deep admiration for Ben and loves me through every dark moment I find myself entangled in .

In short – I am happier than I could ever have hoped for. So buy a damn ticket to see the man by clicking here  and vote for me dammit! Either way I will see you there. And if I cry – pass me a glass of whiskey and perhaps a menthol smoke and leave me be. We can talk later…

Here’s the song that sums up how I feel now….about my life, about the people in it….and how damn happy I am just to be able to breathe, sing and write music.