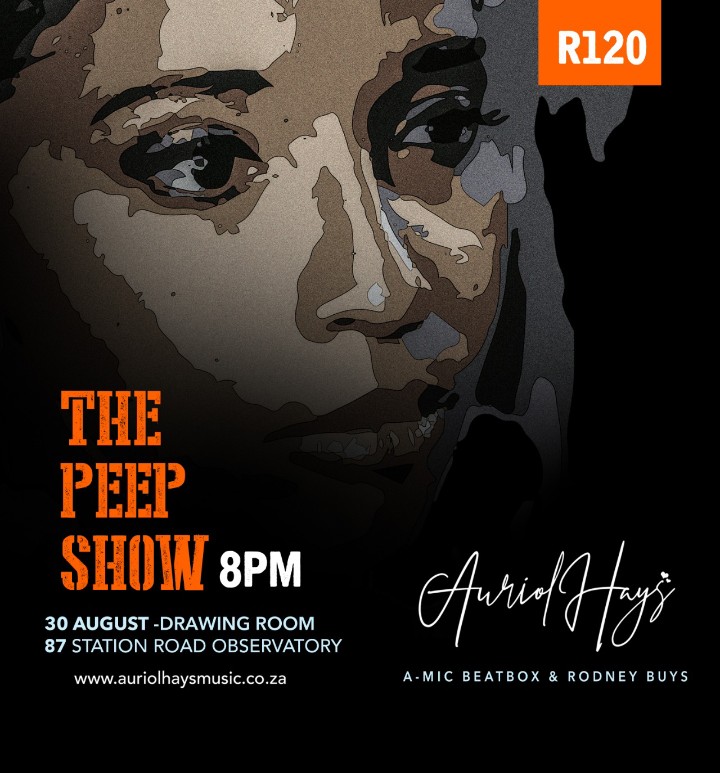 I am singing in three days time. I called the performance The Peep Show, as I am giving people a sneak preview of new songs written. Of course the phrase ‘peep show’ conjures up all sorts of naughty deliciousness, doesn’t it?

My best friend says it will be a good show as it’s his birthday on Friday. I hope so. As I have been so busy; eating, sleeping and dreaming music. So busy I have not been social media-ing to inform people. I think the 30th will see me engage with more people than I have in the last few weeks.

I am always conscious about my song choices as it says a great deal about my current state of mind. I remember one performance where I cried more than I thought I would. I was letting go of people and Rowick Deep was one of them.. Rowick and I created a deep house album (DeepHays) . Rowick had such big dreams. ‘Auriol, do you see that car? This album will allow us to drive cars like that…’  He was tired of the struggle to get by and both him and I are so misunderstood musically in South Africa.I recall feeling alarmed then and a few months later he was dead. The album was never officially released or pushed.The song we wrote, Take Me Home, was played as his casket was lowered. I laughed and cried when I heard it. In the song I was telling some guy to take me home so we can get it on! Well, it appears that Rowick is getting it on. Just somewhere else.

Many of the new songs are more optimistic than anything I have written. Kinda ironic seeing that I left someone I loved recently. Yet, his energy was one of joy and that is how I chose to remember him. PS, I left the dating site. I honestly don’t have time to play the ‘do you like me’ game. I would rather be in studio, rehearsing, writing music or thinking about music. Make no mistakes…I have options but I don’t have the energy or desire. Besides, time is precious and I chose to spend it with people I like or engaging with music that energises me.

Back  to the performance. This is what I am singing:

The rest of the songs are lovely: Constellations of Desire, Nostalgia, In my Lover’s Bed and Like Fire. Those are firm favorites. I know Rodney is gonna want to perform When Worlds Collide, the song we didn’t get to end the Ben Harper performance with.  Yeah, the band and I straight up killed everyone 007 style with that song.

Luckily my girlfriend will pop by so we can talk nonsense and drink whiskey. Not so much as I have a rule I stick to – I do not go out two nights before I sing. Also I want to plan a birthday show now already, as I love being with my band and celebrating. Either that or I will escape into nature alone with books and a muffin. Either way – what comes comes. Life will take care of itself. All I have to do is…not panic. I am loved. I am needed and every bit of energy given will always be generously reciprocated. That’s the other motto I silently live by.

Wish me luck. Oh, I finished the song off in a suitably evil way last night! I felt so…emotionally satisfied afterwards and slept rather well ,thank you very much! Hehe!

PS…Rowick…I am still annoyed at you for all those spelling mistakes on the album! Haha. My favorite song will always be You’re Beautiful ( not ‘you beautiful’) Still. Thanks for the music and teaching me to write a different way to deep house. Also, I really enjoyed singing about love and making love on those tracks when there was none in my life. Deep house just brought out the smooth cat in me. X