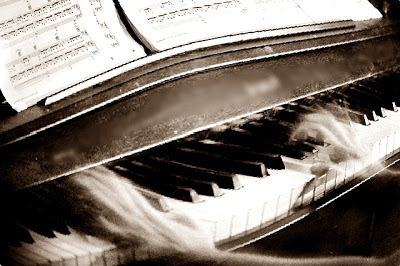 Strange things happen when one is a musician. Or stranger things are revealed. The truth of what one feels can be clearly heard. I handed a friend a song with some badly played piano, voice and some dodge whistling. Do with it what you want I said. I enjoy giving others the opportunity to fill in the blank spaces with their sound. Also, it just gives greater variety in terms of not only sound but feel.

Today I walked into his studio feeling a certain kinda way. It was my sincere hope that some of what I felt would be dispersed in the process of creating music. And then the inevitable happened. My voice betrayed me. I felt so heavy in places. Yet the song managed to squeeze more sweetness than I felt. There was melodic playfulness even though the song, if I had to be honest, is a  warning of sorts. I think my voice is truest thing about me. Even if I don’t mean to be as honest. Or as angry. Or as sweet…

And I became so clear about the soundscape of the new album. I even have an idea of the artwork, the colors and textures of not only my voice but the emotions I want to evoke. There are certain songs I need to write and I can hear the instruments in my head already.

With each album there is a word or a few phrases I play with. This time around it is… Heliosphere. The name of the album will be something different completely. I wanted to name my Dreaming Music album….Scattering stars like Dust (from a Rumi quote ‘we come spinning out of nothingness scattering like stars in the dust’). And my Call it Love album I wanted to name Devil Woman (after a Marlene Dietrich movie poster called The Devil Is A Woman). Alas, common sense and great advice prevailed. Yet those two phrases formed the emotional bedrock of the album.

Regardless of what I feel, imagine, fear or wish to be true or not so true, this album will be something I am deeply proud of. Wish me luck!